Pretty pale golden yellow color with silvery yellow-green flecks. The nose evokes notes of lemon, pear, almond, acacia and hawthorn flowers, sometimes even anis or peach. On the palate, the wine expresses a rounded, juicy texture with fruit aromas, becoming more saline and lemony on the finish, with licorice and brioche nuances.

Producer advice
Its balance between roundness and freshness makes it a perfect drink to accompany tapas like tuna rillettes, poultry terrine, or toast with salmon and lemon sour cream. It also pairs well with delicate fish accompanied by sauce, escargots with butter, a filet of poultry with parmesan, as well as soft or semi-soft cheese.

The BOURGOGNE CÔTE D’OR vineyards stretch out over 65 km, with a width of 1-2 kilometers, from Dijon to Maranges. The Côte d’Or geographically encompasses the Côte de Beaune and the Côte de Nuits. The reputation of the wines from this area is such that the region has been named after the vineyards since the French Revolution.
In 2017, the wine producers in the regional “Bourgogne” appellation that were specifically located in the Côtes de Beaune and Nuits obtained a new title, Bourgogne Côte d’Or, for their wines, becoming an identified regional appellation corresponding to the geographical sectors inside the overall Bourgogne appellation.

Very old genetic selection of Chardonnay which is known as “muscaté” which has almost disappeared. Planted on rocky soils originating from the alluvial/colluvial cone on the edge of the Fixin appellation. Vines about 60 years old.

Vinified at very low temperatures in tank to preserve the original characteristics of this type of grape variety. 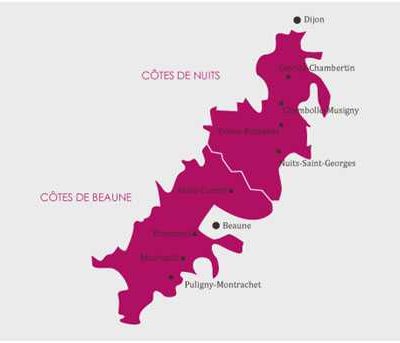