A ruby red robe with fairly dark magenta and violet-purple nuances. The bouquet expresses animal and spice notes, with undergrowth and plums, evolving with age towards musk, leather, fur, and mushrooms. In its youth it often exudes with rose, violet, and fresh cherry aromas.

Producer advice
Autumnal and winter dishes are often associated with this wine (such as stronger meats in sauces) but it would also pair perfectly with fresh cheeses.

Situated on a flatter part of land above the village of Flagey-Échezeaux, this vineyard rests between Vougeot and Vosne-Romanée in the Côte de Nuits. It faces east, greeting the morning sun. The Grands-Échezeaux run the length of Musigny on the southern axe of the Côte, separated by the combe d’Orveau. The Echezeaux separate the hillside between the Clos Vougeot below and some of the Vosne-Romanée premier cru parcels. They have been AOC Grand Crus since July 31st, 1937. The name comes from the gallo-roman root, « cheseaux » signifiying a group of homes: this was doubtless a small hamlet in an earlier time.

The wine comes from the lieu-dit En Orveau, which dominates the area above the Clos de Vougeot, which was once know as the Popes’ Cuvée. Clay-limestone soil with small rocks and a solid layer of Bajocian limestone at 250 meters’ altitude. Vines aged 75 and 50 years old.

Throughout the vinification and aging process each step is undergone by hand, from harvest to bottling. Aging lasts 24 to 36 months in barrel, with 30% new oak.

It is a wine that deserves to be aged peacefully for at least 10 years in order to reveal its full character.

Autumnal and winter dishes are often associated with this wine (such as stronger meats in sauces) but it would also pair perfectly with fresh cheeses. 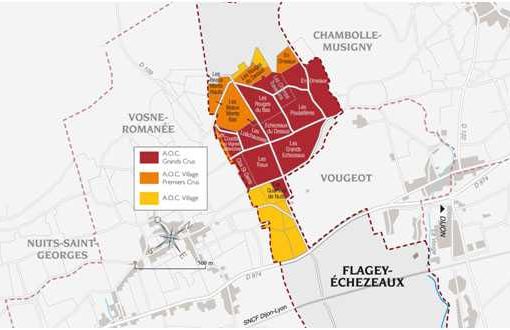