Often considered a “winter wine” because it needs some time aging in bottle. High in color, with a gleaming dark purple robe, its bouquet is a blend of floral aromas (violets, peonies), fruit aromas (blackcurrant, Morello cherry, quince), as well as animal, musk, and pepper notes. It presents a rounded yet spirited attack and a solid structure with aging.

Producer advice
Its tannic structure blends well with nice cuts of meat, like braised pork, rib eye with parsley, a poultry stew, and curry or tandoori dishes; but its delicate aromas and long finish would also lend themselves to more creative pairing such as paella, tapas, or spring rolls.

To guarantee you the best price, online orders are limited to 12 bottles. Beyond that, please contact us. Prices vary by carrier and region.

Officially recognized in 1936, the appellation of Fixin comprises of both village and premier cru parcels. The majority of the production is of red wine grapes (Pinot Noir), though there are a few parcels of white wine grapes (Chardonnay).

Situated in the Côte de Nuits between Dijon and Gevrey-Chambertin, Fixin (pronounced “FeeSAN”) was combined with its hamlet of Fixey in 1860. With barely 130 hectares in total, Fixin is one of the smallest village appellations in Burgundy.

Our vines are situated in the lieu-dit “les Craies de chêne”; which gets its name from the rounded stones that characterize the soils, constituted from the pebbles of alluvial cones. This is a combination of vineyards with aged 60 years old on average, planted with an old, local massal selection of Pinot Noir. 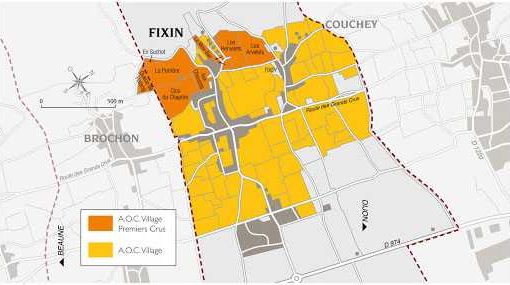